In the fourth week of Lent, we stare into the “Denying Eyes” of Peter and the other apostles. They could not see how they could ever fall away from Jesus, but after Jesus is betrayed by Judas, ten of them flee, and Peter—when he is spotted by a servant girl and sees that his own neck is on the line—sees fit to deny Jesus, which leads to his own eyes weeping in remorse. We sinners likewise deny our Lord in many ways, but Jesus denied Himself to take up the cross for our salvation. 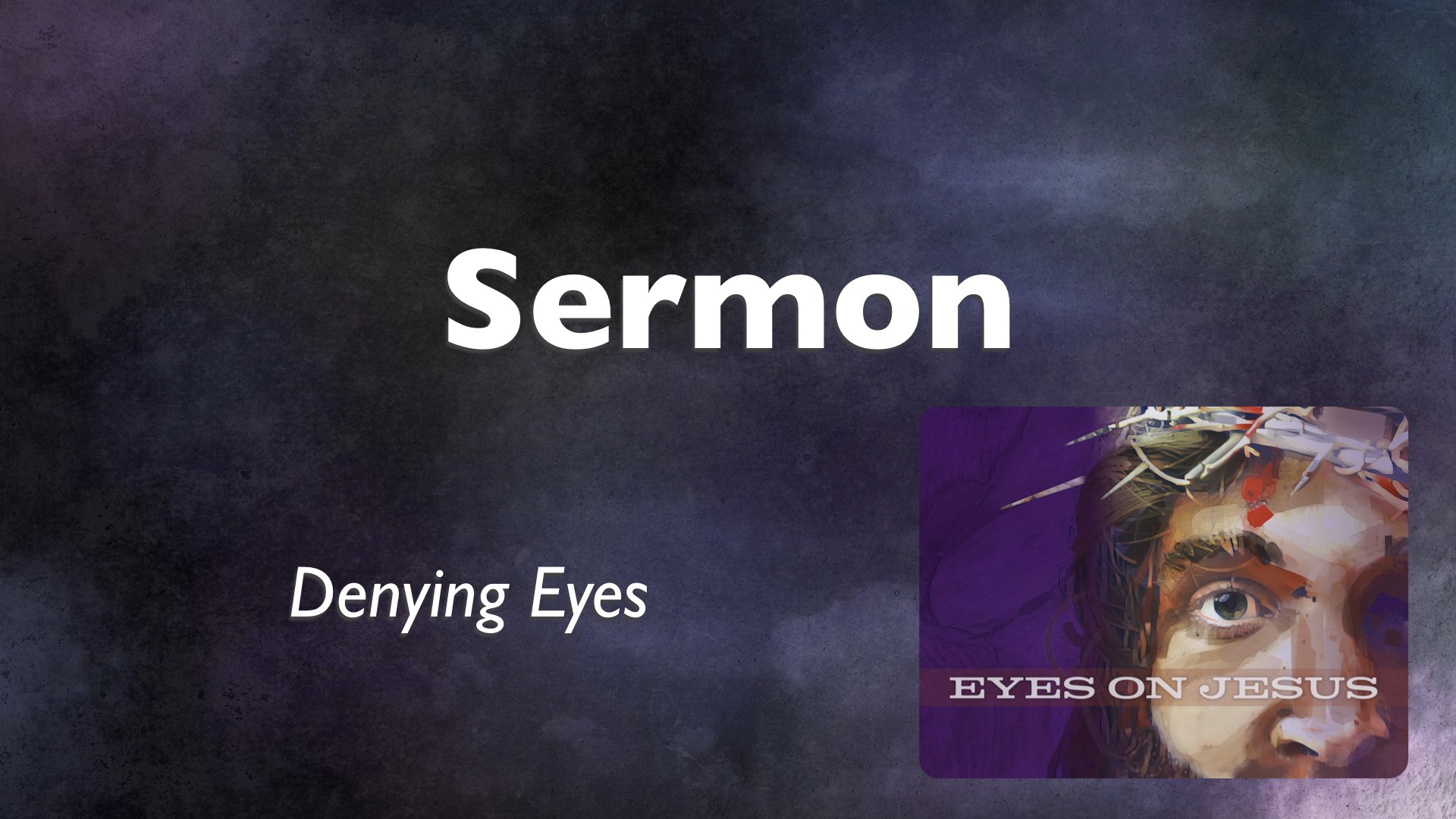 Two weeks ago, we looked at, and through, Judas’s betraying eyes. We examined our own betrayal of Jesus. Last week, we saw the disciples’ sleepy eyes in the Garden of Gethsemane, and identified the times that we have fallen asleep as Christians. This week, we examine other ways our eyes can fail as we look through the denying eyes of Peter, the other apostles, and even us.

In the Upper Room, the apostles and Jesus had sung a hymn and headed for the Garden of Gethsemane. There were only eleven with Jesus, because Judas had already left to get staged for his betrayal. Jesus told the group they would all fall away, because it was predicted in Zechariah 13:7: 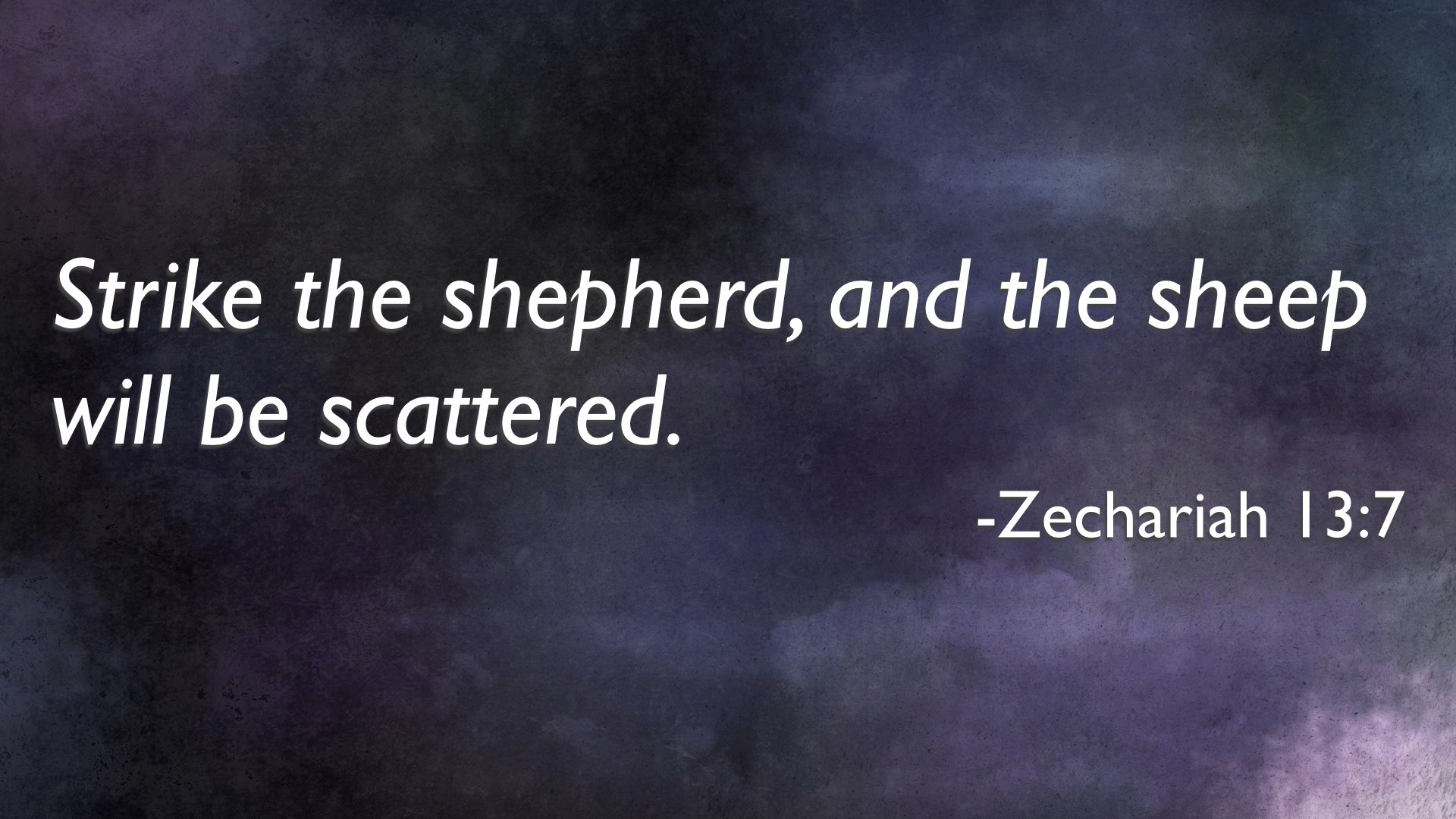 Their proud spokesman, Peter, thought he was more loyal than that, saying: 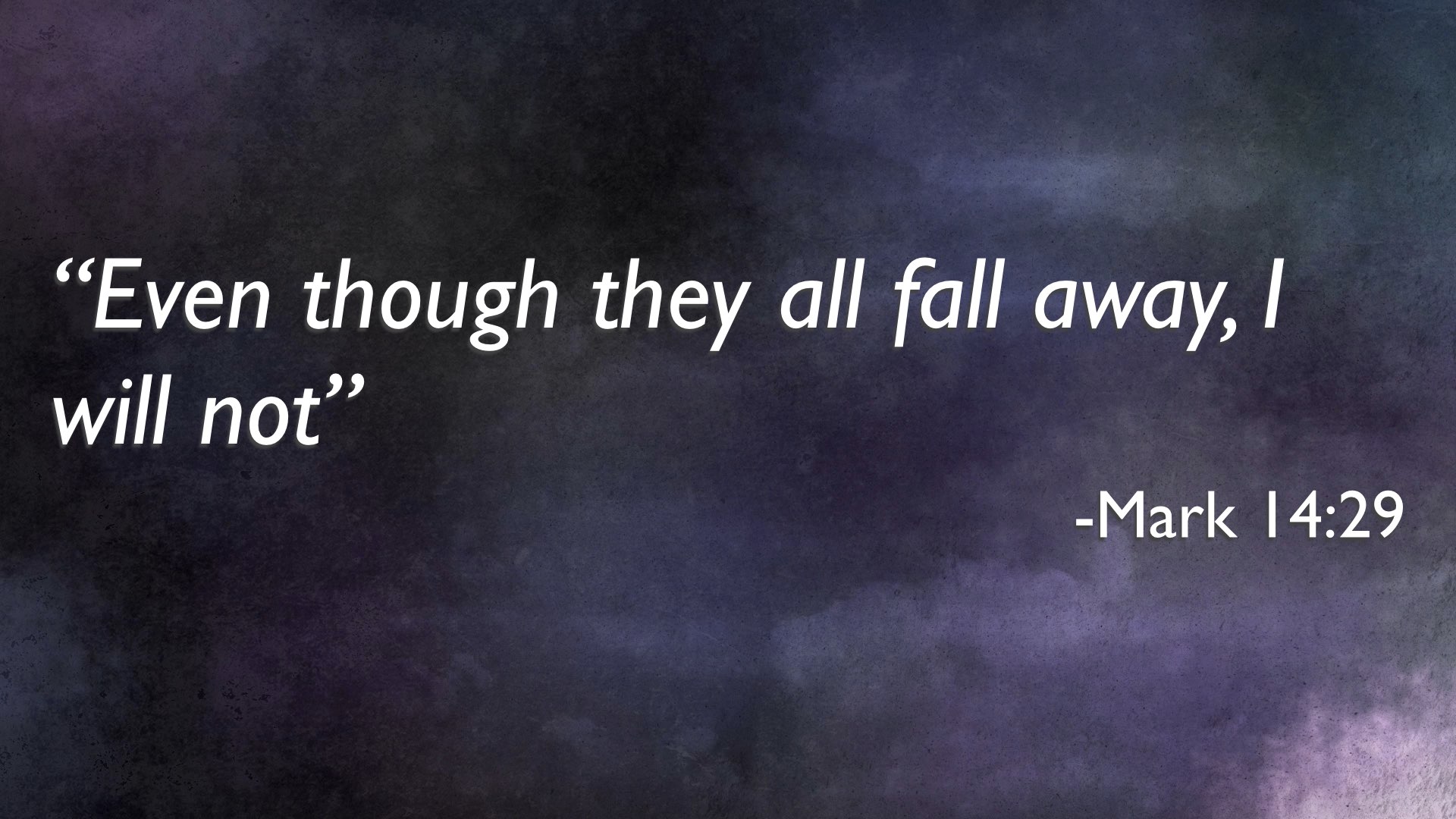 So Jesus told him:

“before the rooster crows twice, you will deny Me three times”

“If I must die with You, I will not deny You”

The rest all said the same! Not just Peter, but they all tried to exempt themselves from admitting that they would fall away from Jesus. This was very foolish: they were denying the words from the lips of Jesus and the inspired and inerrant Word of God recorded by the prophet. 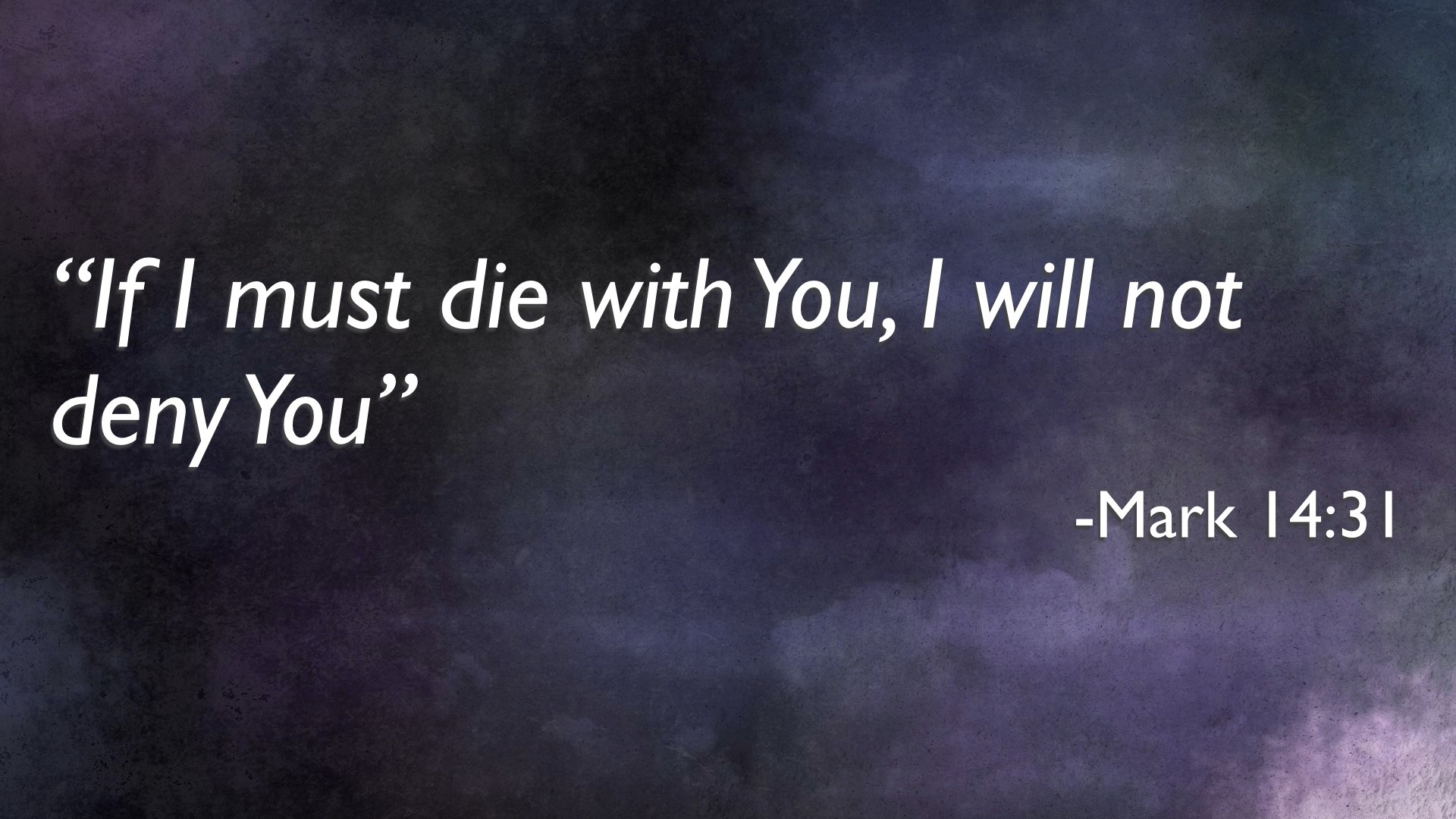 You likely know the song “Lyin’ Eyes” by the Eagles. The song tells us: even though we try to disguise our intent with a smile, it’s not enough to hide our lying eyes. If our eyes give away lies to each other, then Jesus will definitely be able to see the lying and denying eyes of His people.

So, what was in the eyes of the apostles as they looked at Jesus predicting their falling away from Him?

Likely at first, a look of horror at what an awful thought; then a look of disbelief as they formed a defense; and then that slightly crazed look of a religious fanatic who thinks he can keep his vows by his own will. 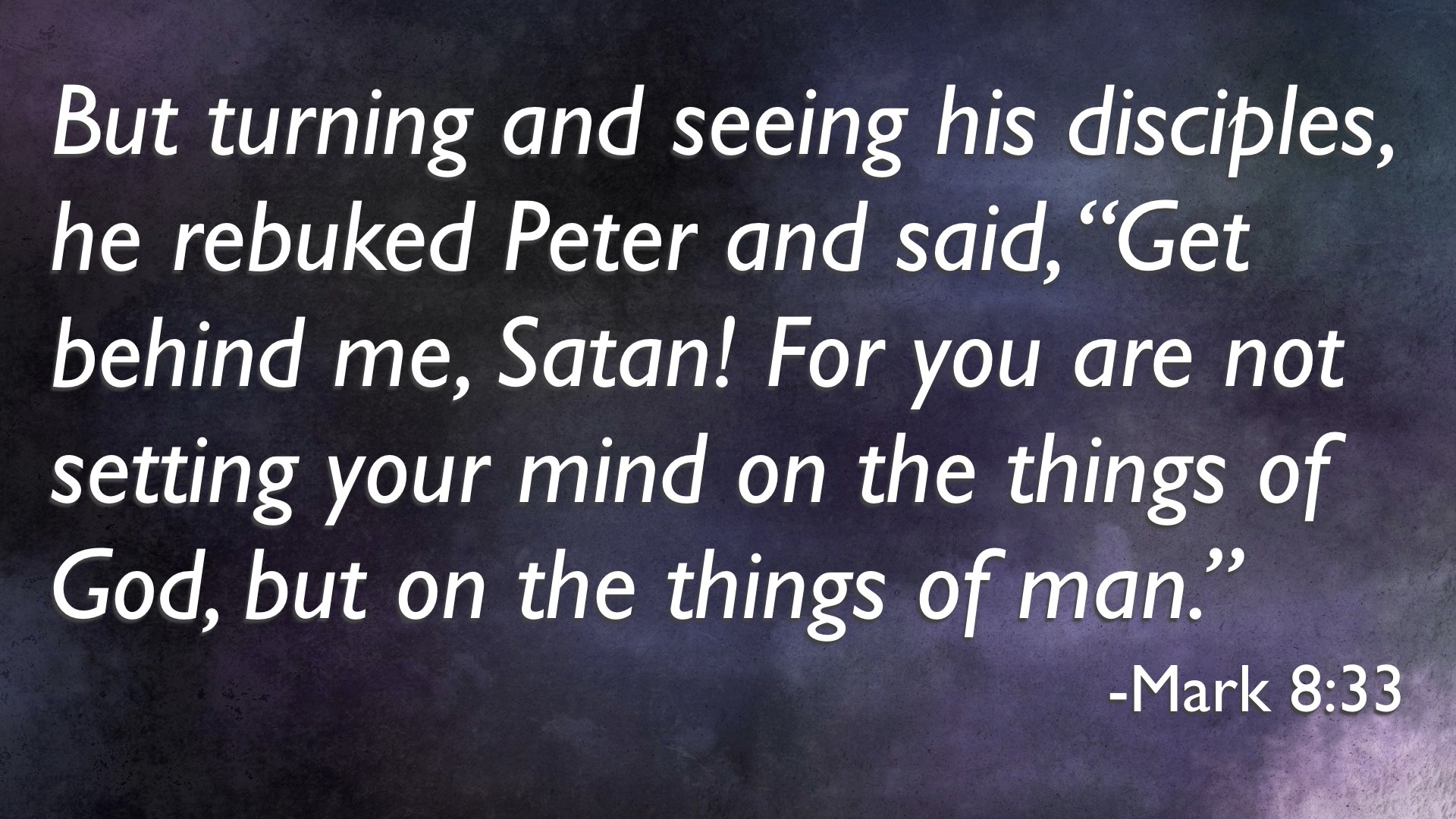 Yes, the apostles eyes weren’t letting His words sink into their ears. They were lying to themselves as they were denying their Lord’s words. They were focused on their own perceptions and plans, and they had their minds on the things of men rather than things of God. (cf. Mark 8:33)

So the other 10 apostles would go on to deny Jesus by falling away, in spite of their protests to the contrary. Then we see Peter dramatically deny Jesus when a little servant girl and some bystanders recognize him. But, as we saw last week with Jesus alone staying awake while the others slept, it had to be this way: Jesus had to be the last one standing.

The one who would humbly submitted to suffering and death, for us and for our salvation. When Jesus quoted the prophecy of Zechariah, He had actually added a couple words to it that I left out earlier. He said: 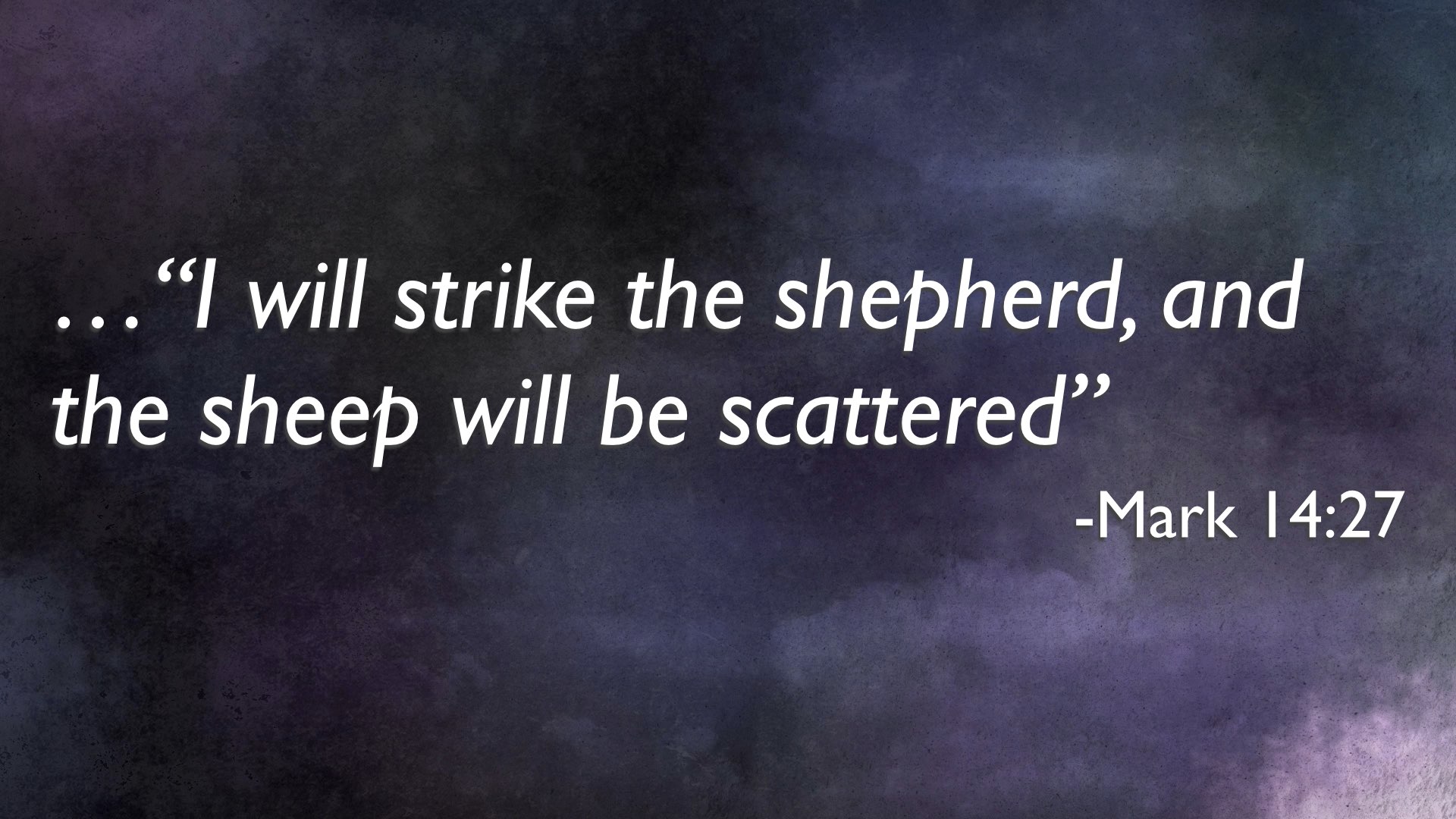 It’s just like we heard a couple weeks ago, the one who ultimately handed Jesus over wasn’t Judas, but the Father Himself. Or, as we heard last week, it was the Father’s plan for Jesus to drink the cup of His anger—every last drop. That takes us back to Isaiah 53 and the Father’s will to crush the Messiah so that the masses would be counted righteous in the Father’s sight:

“He certainly has taken upon himself our suffering and carried our sorrows…He was wounded for our rebellious acts. He was crushed for our sins. He was punished so that we could have peace, and we received healing from his wounds.”

Earlier, we heard Jesus’s words about the disciples denying Jesus, but I left out the Gospel! Jesus did tell them they would all fall away, but then He said: 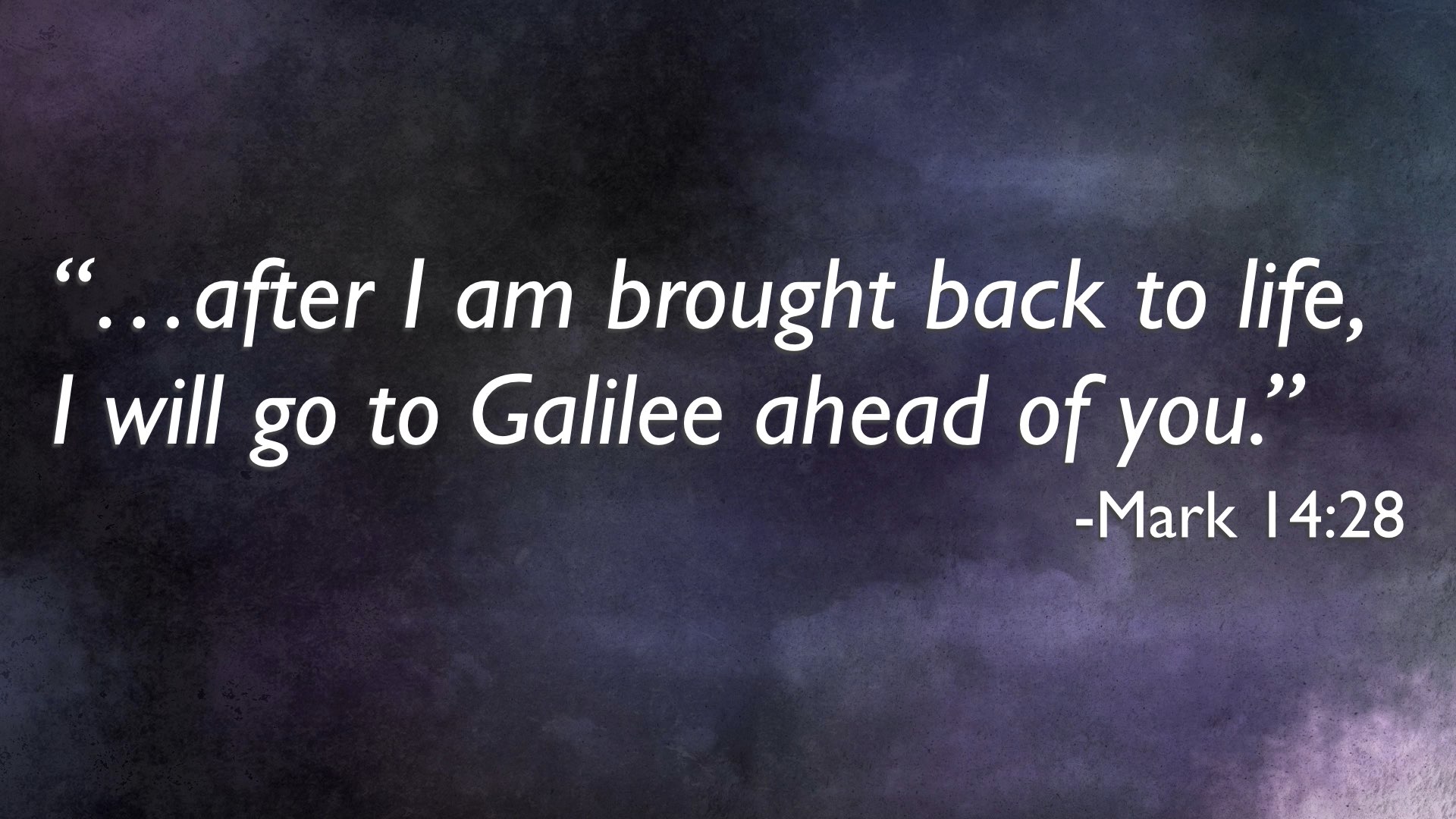 His words about their falling away and denial did prove true, but even better, so did His prediction of the resurrection and His appearance to the apostles. To these denying and doubting apostles, Jesus later entrusted the teaching, and baptizing, that would go out to all nations and turn thousands to follow Jesus, empowered by God’s Spirit.

Then what about Peter, who had fallen so dramatically, and denied that he even knew Jesus?  First, I should point out that he was the only one with the courage to even get close to Jesus’s trial. So there’s really no room for Peter-bashing here.

Second, can we think we would never do such a thing?

In contrast to Judas, who had a change of heart (and tried to deal with his guilt on his own), Peter had true, godly sorrow over his sin. Which Paul addressed: 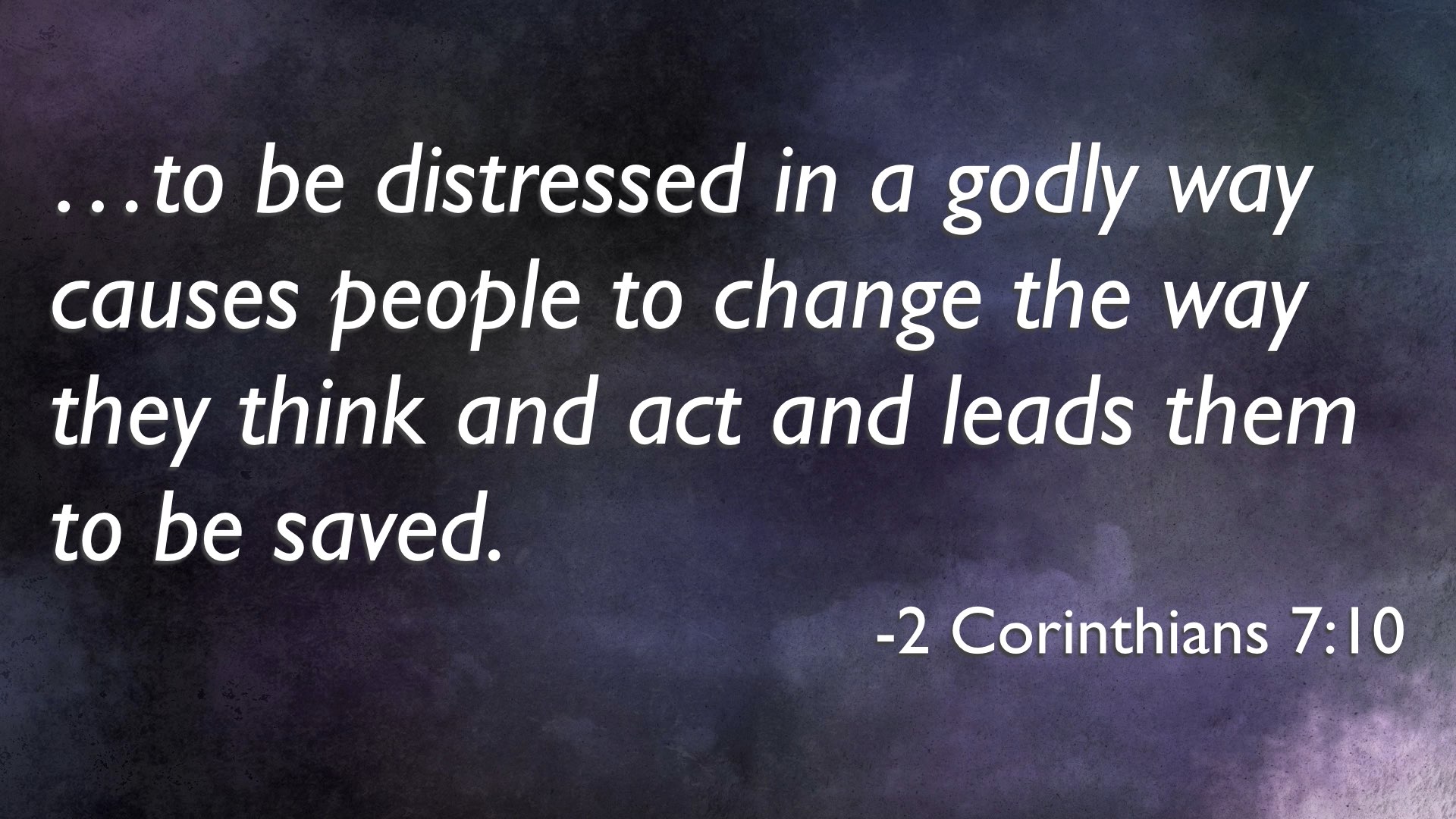 That attitude, prepared Peter for the forgiveness he received on Easter, when Jesus spoke the forgiving words, “Peace be with you.” And later on, at the Sea of Galilee, Jesus showed up for a breakfast on the beach with the disciples, including Peter. There Jesus gave Peter a threefold admonition to feed His sheep, which negated Peter’s threefold denial. Then Jesus said, “Follow Me,” to the restored Peter.

And now He says the same to you: 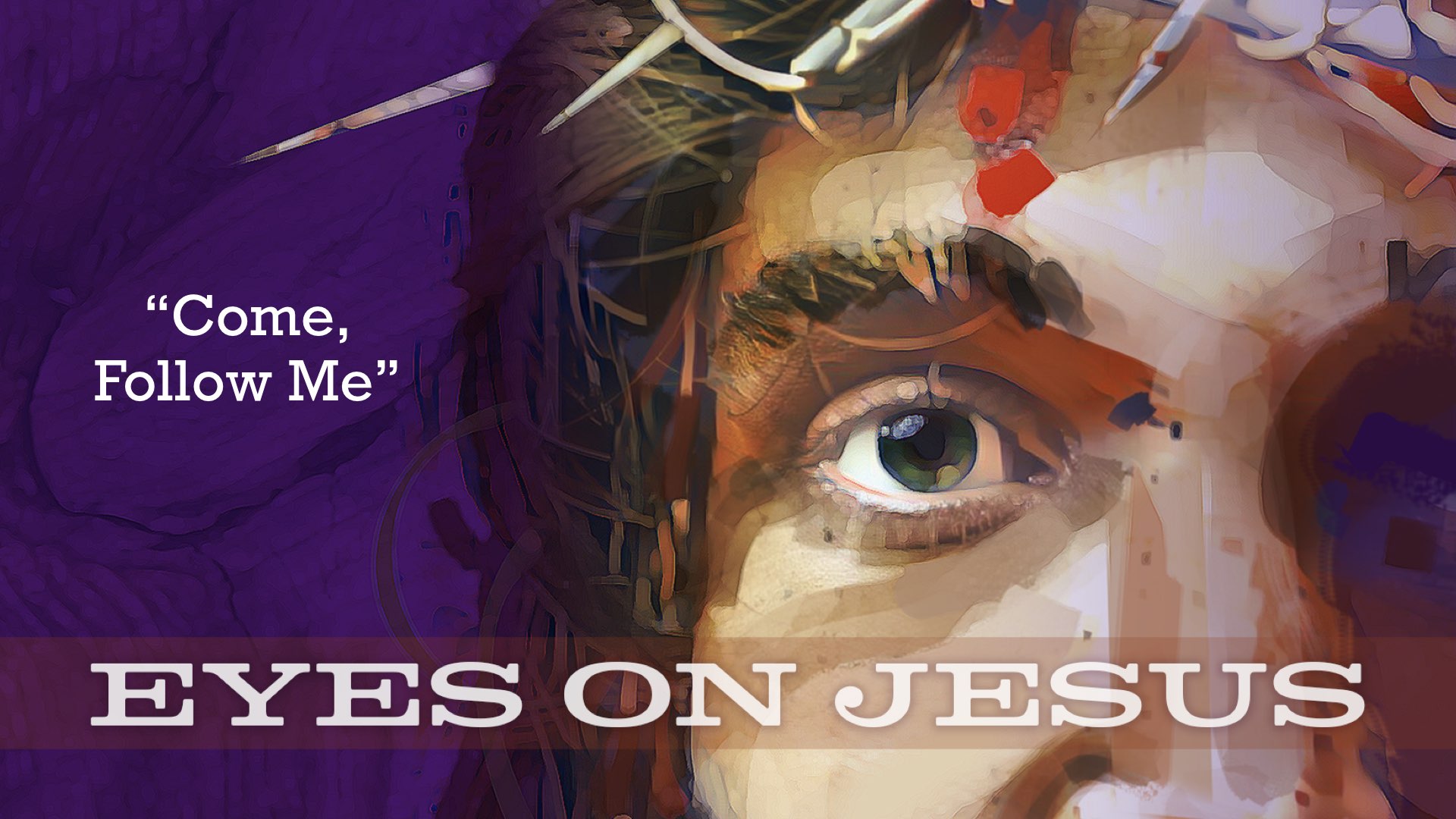 Through your Baptism, you have been given a gift greater than the whole world. You have lost your life in this world and have now found your life in Jesus and His kingdom, where you’re safe from being eternally separated from God’s love.

So, “Come, follow Me,” Jesus says. Come, for it is a truly joyful journey. Amen.

As you follow Him, may that peace of God, which transcends all understanding, guard your heart and mind in Christ Jesus. Amen.